That’s where my knitting is right now.  Most of it is because I’ve had less time to knit (and less time to blog) due to my commitment to eating healthy and working out that I mentioned in my last couple of posts.  You remember those.  From a couple of MONTHS ago?  Uh…yeah.  Working out takes more time than you'd think.  Somehow my recommended 30 minutes takes me nearly an hour.  After working all day and then coming home to cook and clean up before I even begin to exercise, the night is over before I know it.

The good news is, I’ve actually lost 8 pounds and am only 2 away from my target weight!  Woot!  I’m fitting back into clothing that I never thought I’d wear again and I’m actually not starving (most days).  Having given up a lot of foods that were not good for me, I’ve come to realize which food I wish had zero calories and was so healthy for me that I could eat it every day.  Can you guess?  Chocolate?  No.  Ice cream?  Nope.  Fried chicken?  Close, but not that either.  The one food I miss the most --> PIZZA.  Not even kidding.  I didn’t even eat pizza that much before, but now that I’m counting calories and carbs, I want it almost more than I want to feed my yarn stash.  So, armed with a recipe for cauliflower pizza crust, I hope to satisfy my craving in a way I don’t have to feel guilty about.  We shall see.

What?  Knitting?  Oh yes, that’s what this blog is about.  Or should I say, it’s about my lack thereof.

The Husband’s sweater now has one sleeve.  After I quit procrastinating, it was just a matter of figuring out what type of sleeve would look best.  If you remember, I seamed the front and back and decided to knit the sleeves on from the top down because I HATE sewing in sleeves (mostly because I’m terrible at it).  The pattern called for a straight knit set-in sleeve with no sleeve cap shaping.  I thought that might look a little weird, so I decided to start one sleeve using short-row shaping for a sleeve cap to see how it looked.  I found how-to instructions here, and went to work using exactly that method, but I had weirdness around the armhole where I did the short rows.  There were just gaps.  Witness:

Thought I must be doing something wrong, as they were worse on one side, so I tinked back and tightened up that side.  No matter - still gaps.    Then I decided I would take a step back from the short row sleeve and start the other sleeve by just picking up stitches and knitting with regular decreases (the in-the-round version of what the pattern called for).  Once I got down to about elbow length on that sleeve, I had TH try it on to see if it was bulky under the arm.  He said it wasn’t and it looked good on him, so I finished the sleeve last night. 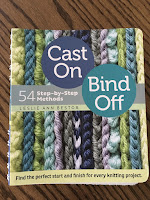 I used a tubular cast off for the first time.  Hadn’t thought about that when I decided to knit the sleeves top down, but my handy little “Cast On, Bind Off” book got me through it.  So I pulled out the short rows on the other sleeve and started one to match the other.  After that’s done, just the neckline to do and finally something finished.

I still haven’t done any seaming on my little jumper (tunic) that I had to knit twice.  If I’m faced with limited time and a choice between seaming or knitting, I’ll go for knitting every time while my pieces sit in a neat little pile on my dining room table.

Another unfinished project that is starting to complain really loudly is the Midsummer Aran pattern that I’ve been ignoring for at least a year.  In fact, I had to look back at Ravelry page to see when I actually started this beast.  It was TWO flipping years ago.  Sad thing is, the only part that still needs to be done is the yoke and neckline.  But here’s the thing:  that’s exactly where all of the different lace charts converge to make one big pile of “I can’t figure out which stinking chart I’m supposed to be on”.  Word.  But the beast is getting whiney enough on a shelf in my craft room that I can’t ignore it much longer  Besides, I really would like to wear it someday.  Once I muster the courage to begin again, I’ll just have to figure out where in the heck I left off.

Oh, I forgot, I did manage to finished my made up mosaic pattern socks.  Behold: 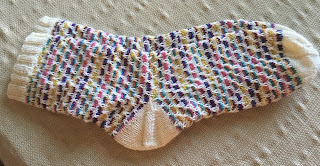 The only things I didn’t execute very well on these were the sides where I went from one needle to the other (used magic loop method).  The tension was too tight and you can tell the socks have less stretch on each side and a kind-of “line” where there shouldn’t be one.  This is also the first sock I’ve knit using an afterthought heel.  I’ll be honest, I don’t care for it, but I understand the need for the technique so, there you go.