The sun is shining here today which is a welcome sight since we had some of the hardest rain a couple of days ago that we’ve had in a long time.  In about 24 hours we got well over 10 inches of rain.  I mean it was torrential.  You all know how much I enjoy gray skies and rain (she said sarcastically). To make it worse, The Husband had just finished seeding a rather large portion of our lot with grass seed.  He hadn't gotten it all covered with a seed blanket and/or straw.  Had we gotten a light shower, we’d have been okay and been grateful we didn’t have to water.  Unfortunately, I’m certain that most of the seed is now fish food in the lake, along with a good portion of the top soil we purchased to prepare for the planting.  The Husband is trying to stay positive, believing the seed was pushed further into the ground by the rain.  I am trying not to be Negative Nancy but look at our back yard:

The side yard, which is a rather huge area, looks a bit less sad, but still…  We’ll know for sure in a couple more weeks when the seeds sprout.  Or don’t.

In the meantime, I have been knitting when I’m not too exhausted after work (rare) and have managed to finish a couple of things that I can actually show you.  First, I already shared with you the sweater I knit for my adopted granddaughter who now lives in California.  Last week I managed to ship the thing and here is a picture of Cori in her Corrie: ------->

It is big on her, which is exactly what I was going for.  Should be near perfect this fall and winter.  So nice to knit something for a child that will fit for more than two weeks!

In addition to the Corrie, I also sent Cori’s mom, Taryn, a Boxelder Cardigan I finished for her.  I had her choose the yarn WAY before Christmas - a beautiful purple called Cuarzo in Malabrigo Worsted.  This is the first time I’ve knitted a hoodie and I was so pleased with the entire project.  I am beginning to think that Malabrigo Worsted is a magic yarn since my best projects were made with it. 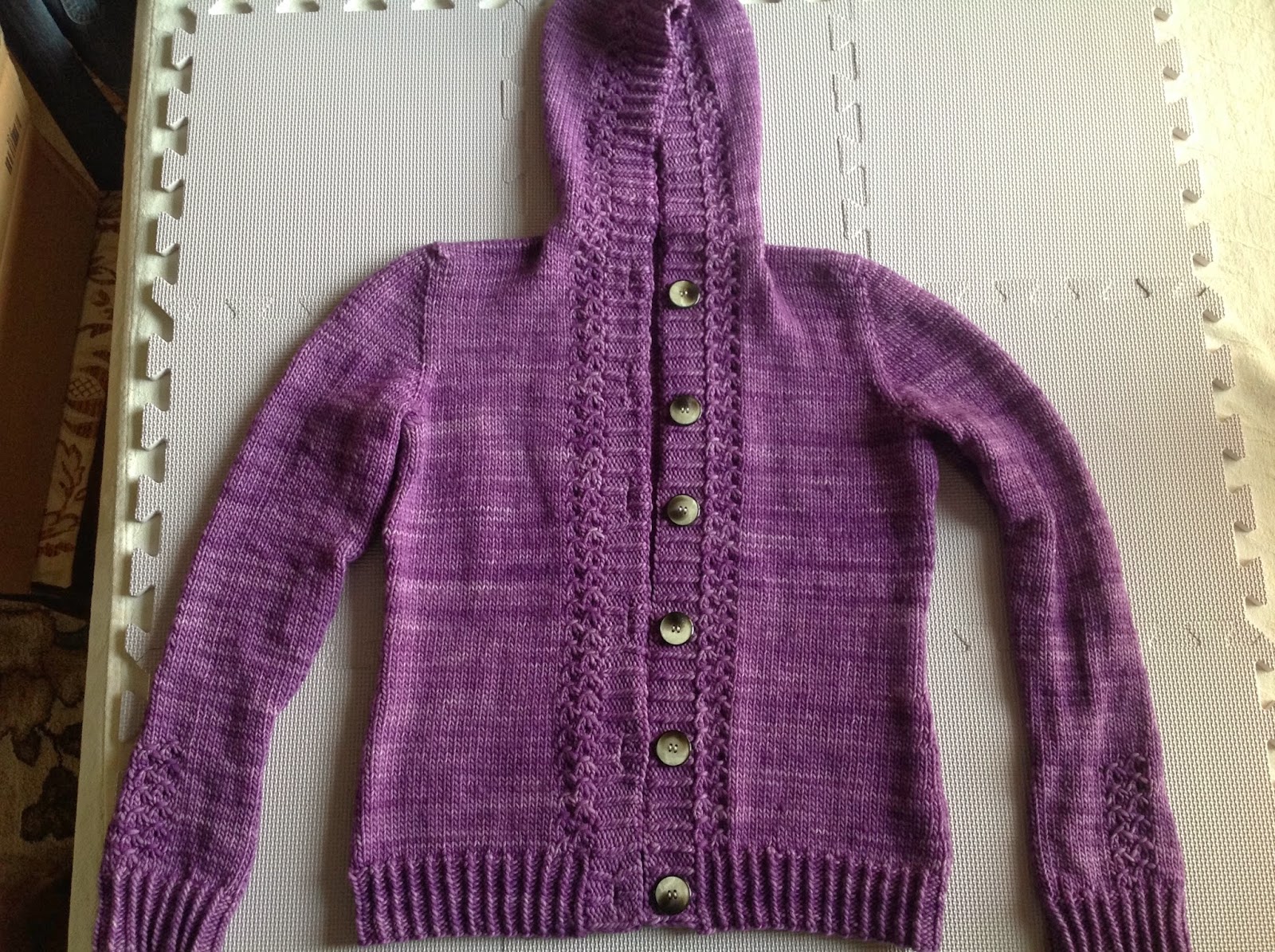 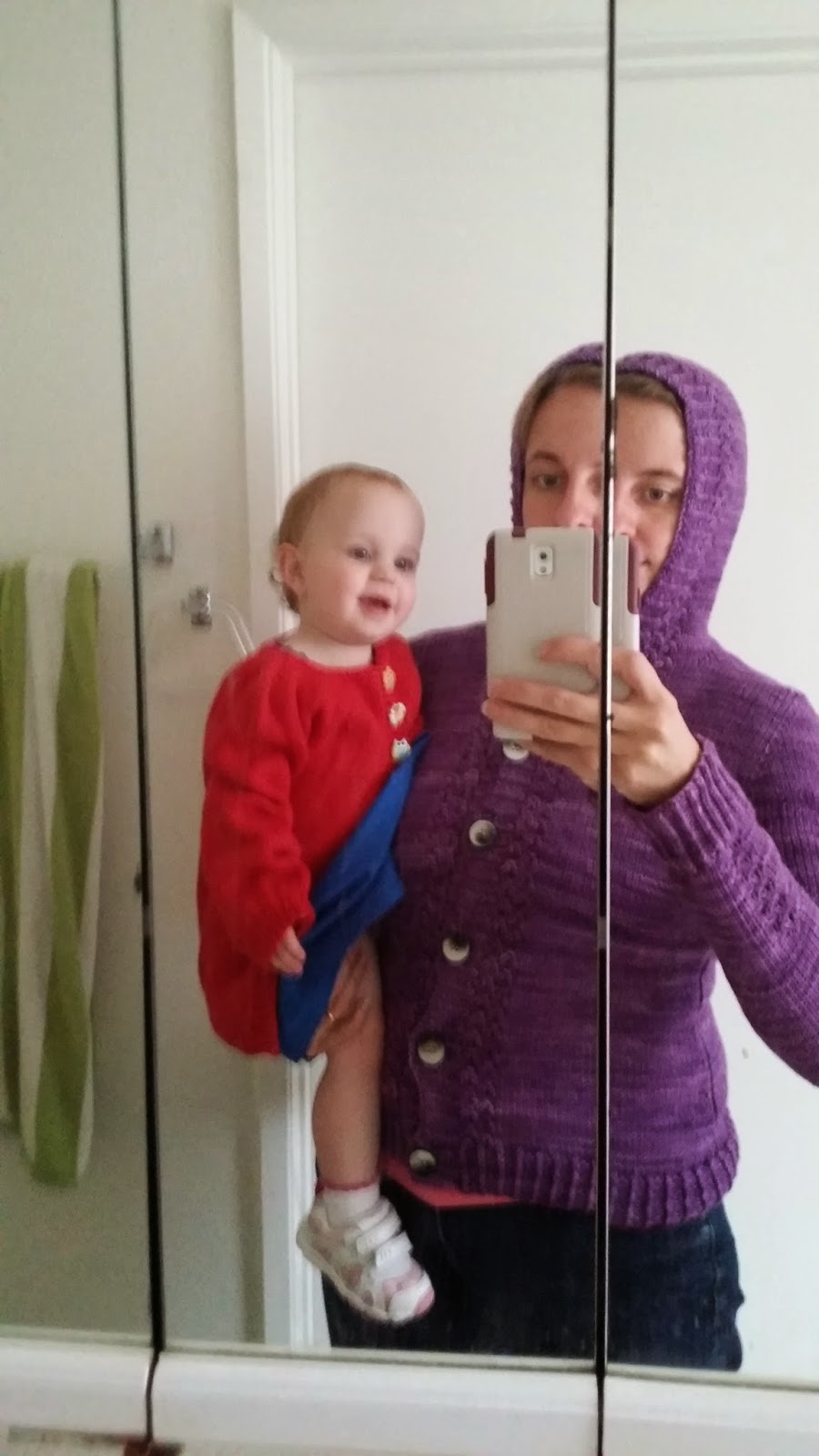 Boxelder’s sleeves are intentionally long, which is great because Taryn is rather tall and the sleeves are the perfect length.  I did not block the sweater very aggressively - I wasn’t quite sure how best to block the hood and didn’t want to have a big, sloppy stretched-out mess on my hands - so the hood is a lot tighter than it should be.  Taryn should be able to reshape it once she’s washed it out the first time.  You’ll also notice it’s a bit tight around the midsection, however this is mostly due to the fact that Cori’s little brother or sister is expanding Taryn’s horizons (YAY!).

Oh, and finally, in my last blog post I mentioned a little goodie that my friend Melissa had brought me.  She always finds the cutest things: 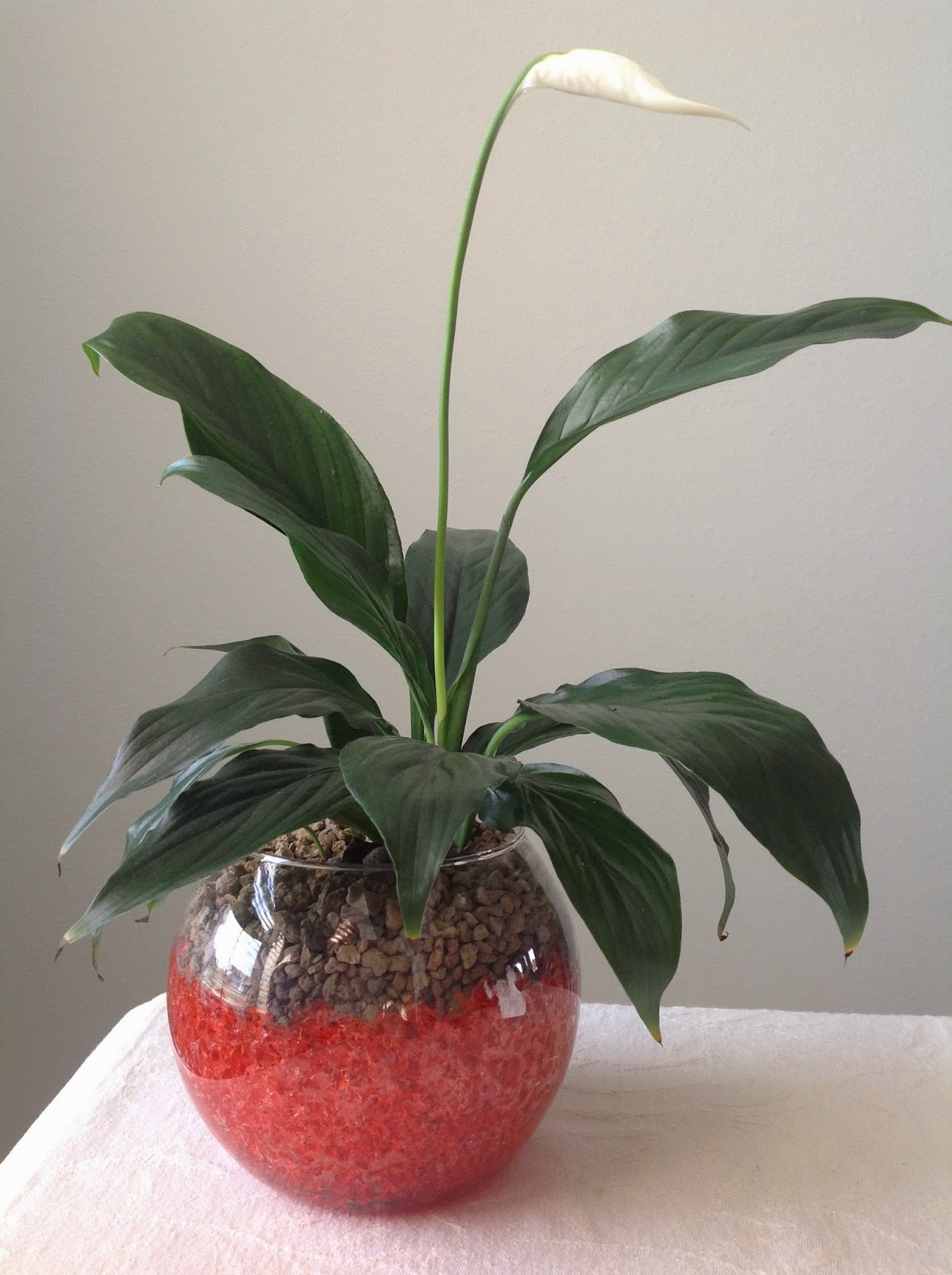 I haven’t killed the plant you gave me!  :D

Have a beautiful Sunday!

Gloomy Gus and His Second and Lesser-Known Cousin, Dismal Debby

Okay, there’s really no Dismal Debby, but there just aren’t any good words that begin with an L to use with my name to describe the mood in the house today.  Why, you ask?

And lots of it.

We were rudely awakened early this morning with a fairly severe thunderstorm, the weather radio going ballistic. The rain was beating so hard against the house, you couldn’t hear much else.  Not only did I immediately realize that the yard was going to be a swamp once again (we still don’t have all of our new yard sodded (is “sodded” a word?), but it also dawned on me that there was no way we were going to be able to get five stubborn and rain-abhorrent Dachshunds into the yard to do their business.  We had to wait for a momentary lull in the downpour (which was not much of a lull, actually) and the dogs were not amused.  I wish I’d gotten a picture of their poor, pathetic little faces while they looked at me as if I was sending them to their death by shooing them off the back deck.

It rained so much that even our “lake” had moved several inches out back.  See that little cluster of Cypress trees?  They are normally at the edge of the water.  (NOTE TO MY MOTHER-IN-LAW:  do NOT panic about a possible flood, this water was still quite a ways from our house.  Really, we are fine.) 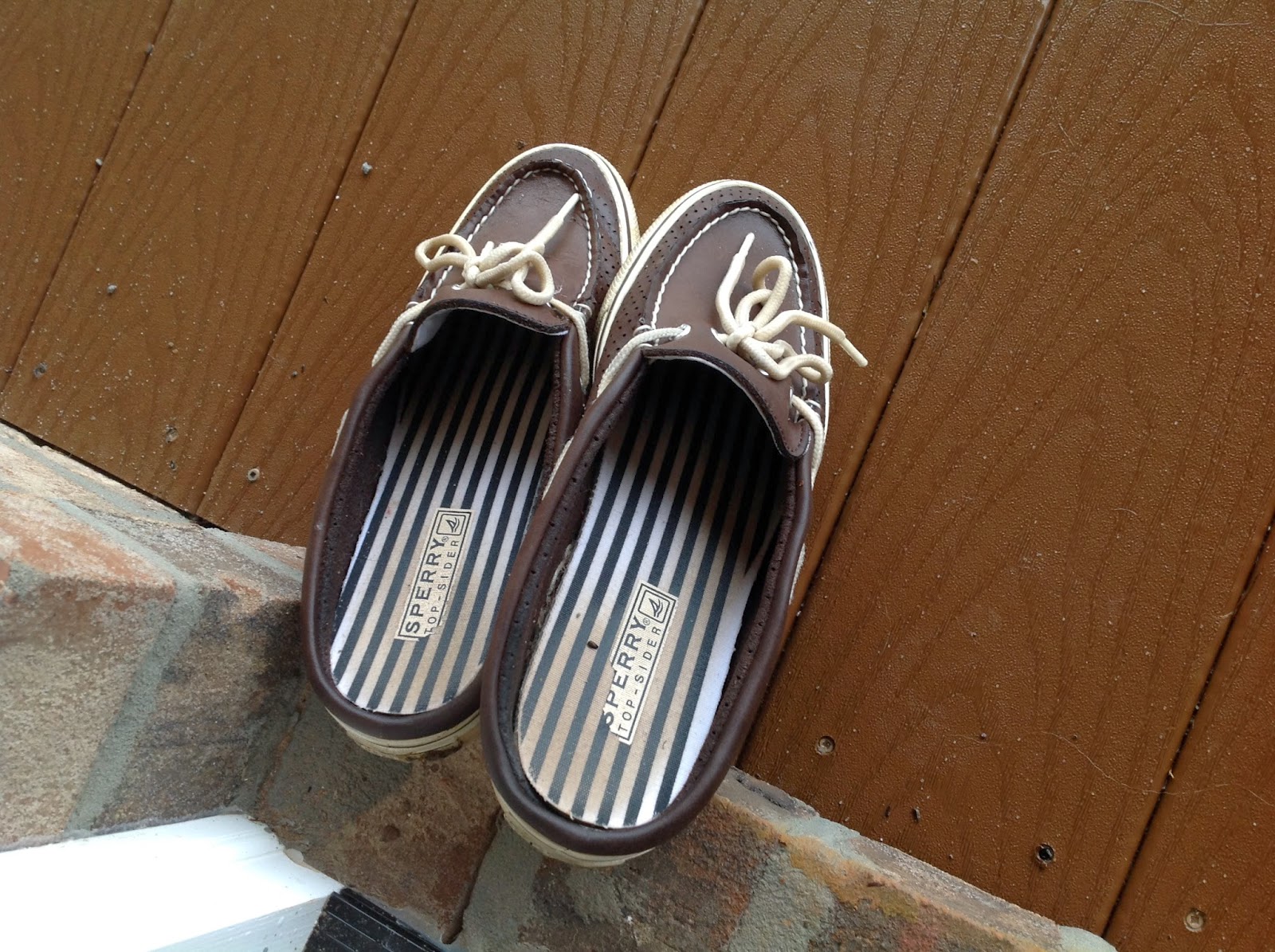 I keep a pair of Sperry’s on the back deck right next to the back door for early morning dog duty and while a good half of our deck is covered, it rained so hard they were absolutely soaked.  I was going to pick them up and carry them into the garage to dry, but the water was literally pouring off/out of them.  Seriously.

I had to put on The Husband's Crocs that sit inside the door in order to venture out with dry tootsies which, in his shoes, looked like clown feet. 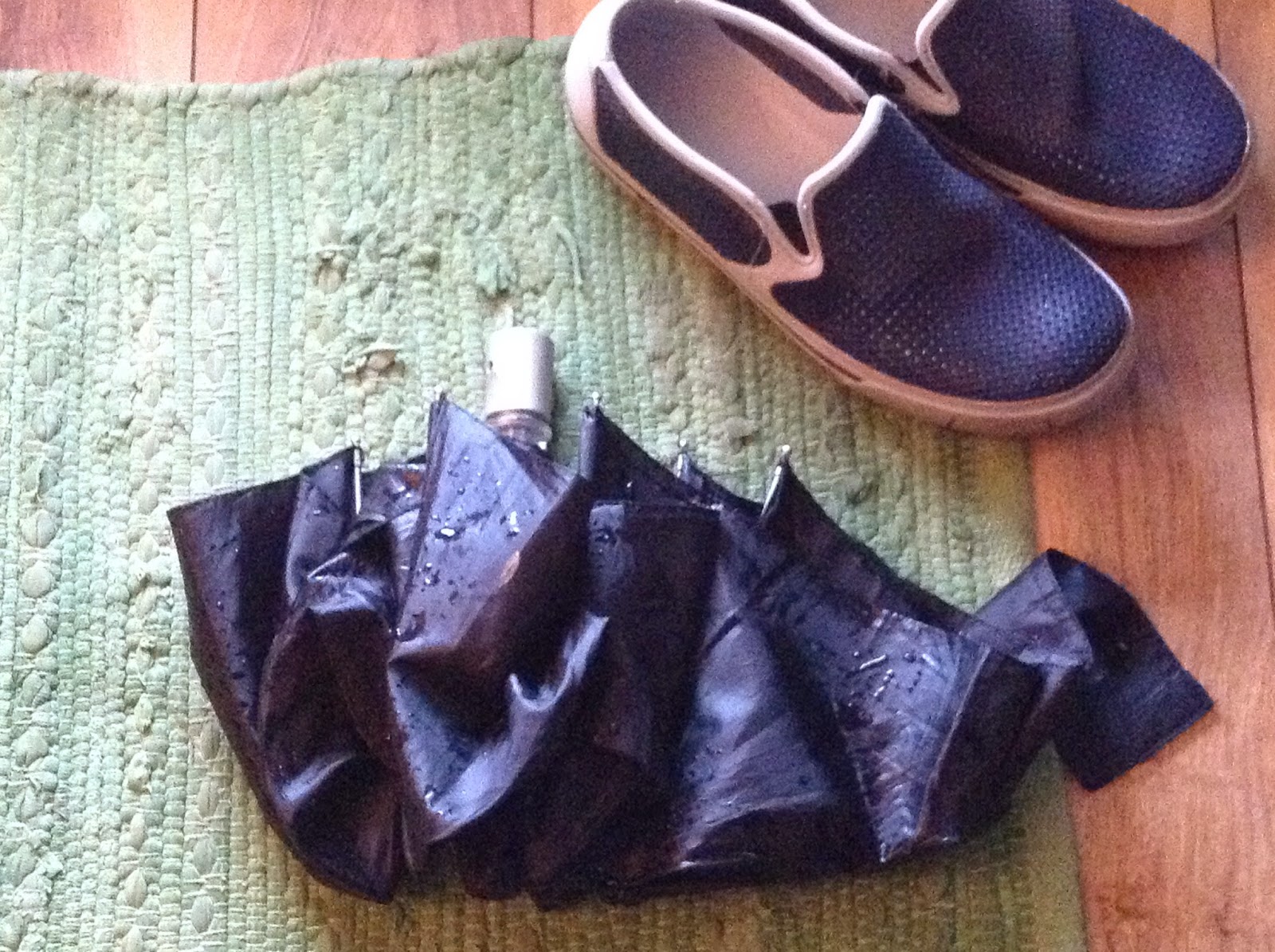 It rained so hard against the windows, you couldn’t see anything through the water-deluged screens. 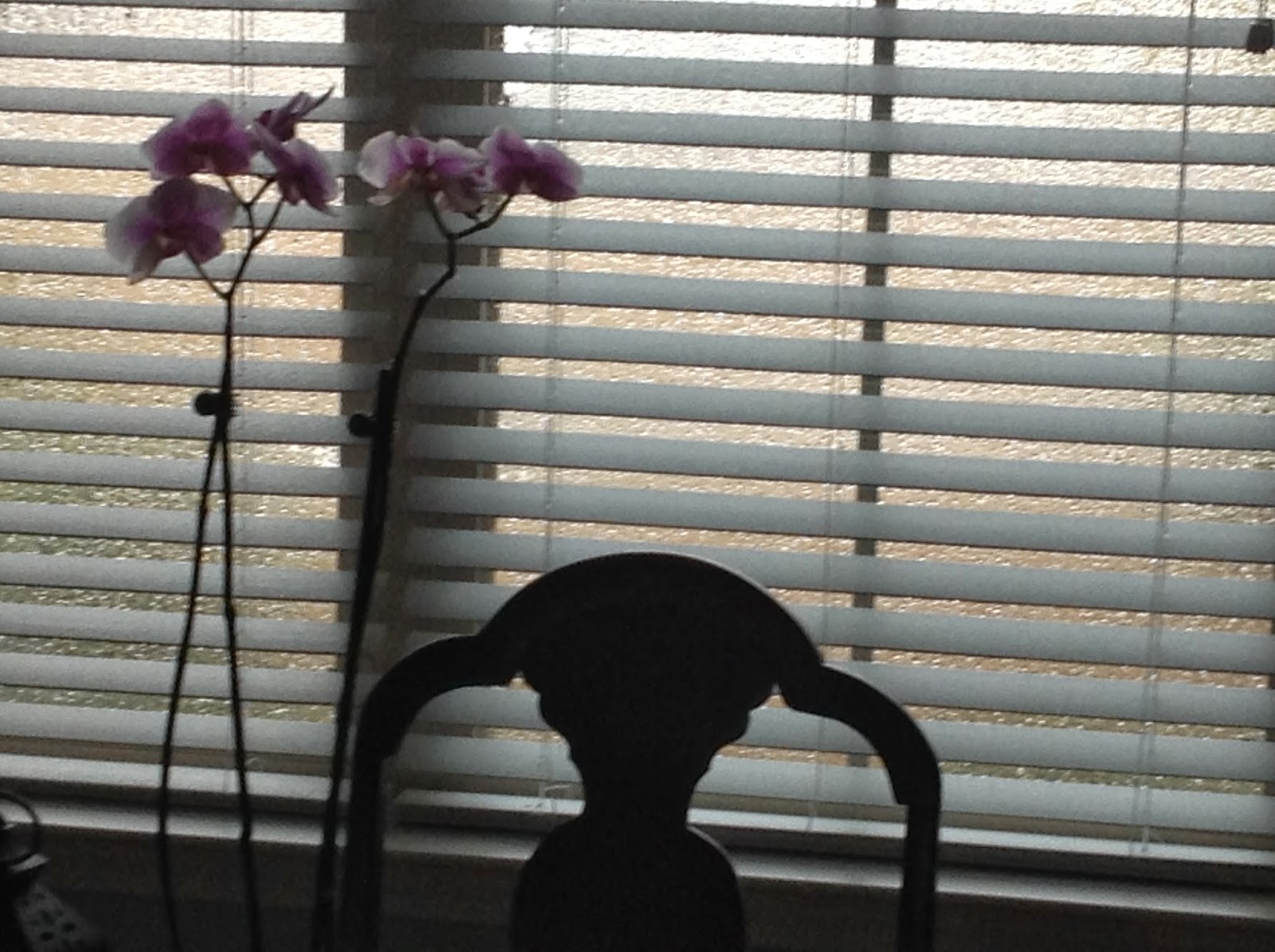 And so the day has gone.  Aside from a short reprieve in which the sun shone in order to give hope to the drenched masses that an ark was in fact, not yet necessary, it has rained and been gloomy all day.

Good thing I had such a phenomenal evening last night.

A group from my LYS came over to break our house in properly which we all did by eating as if a famine would strike any minute and knitting on various and sundry projects.  I met a new friend, Marie, who has been making Dead Fish hats, which were adorable (even though they don’t sound very pleasant).  Leona brought me a plant, everyone brought some great food, and my dear friend Melissa* even left me some killer cheesecake which I was tempted to eat for breakfast this morning.  I didn’t, but it’s looking good for supper.  Oh, and Sarah brought this cream "cheese/some sort of sauce which she told me the name of and which name I cannot for the life of me remember/capers with crackers appetizer thingie" which I can only call the culinary equivalent of crack.  I’m not kidding.  She left me a good bit of it and I ate nearly half of it after they all left while watching Netflix and knitting a sock.  Okay, mostly I was just inhaling the stuff and watching Netflix.  The sock could wait.  Here’s the only bad thing about the evening:

I got no pictures.

I know, you’re colossally disappointed in me and I am disappointed in myself.  I even mentioned pictures at one point but must have been overcome by the excitement of the evening, so I got nuthin’.  I am deeply, deeply ashamed… 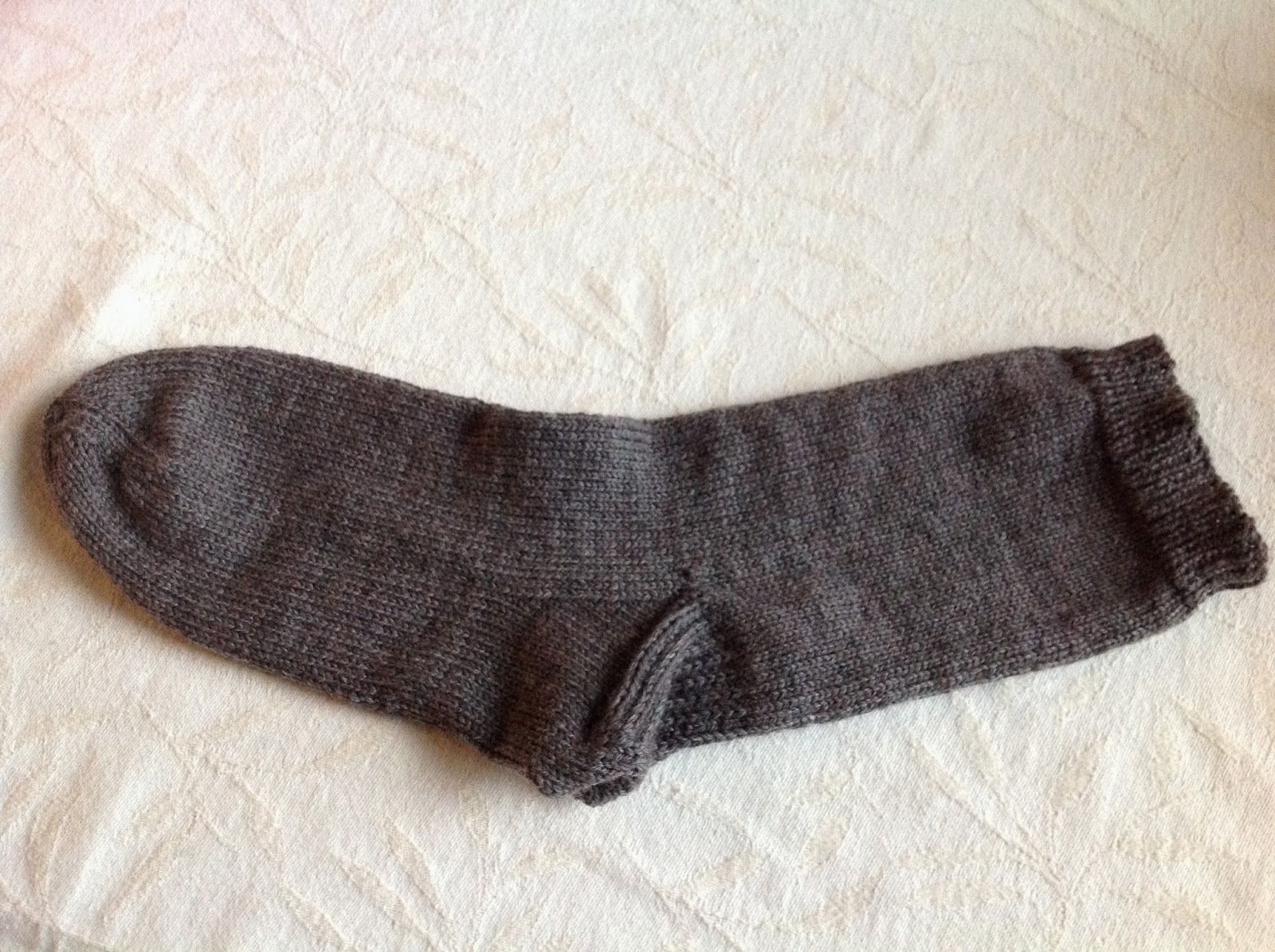 Er…I did get the sock done though.

*Melissa brought me another little goodie, which I'll blog about next time.
Posted by Lisa at 4:21 PM 11 comments:

I’m thankful it’s Friday here, as I’ve been working a lot of hours and I’m SO ready for the weekend.  Seems like nearly every evening for the last couple of weeks after I get off work, I either have running around to do or housework and cooking and by the time I get done with all of it, I’m too pooped to even knit much, let alone blog.  Also, quite frankly, if the rain doesn’t stop (the back yard is starting to look like a swamp) and we don’t get a sunny day soon, I’m liable to lose what’s left of my wee little mind--a condition not conducive to blogging.

Nothing exciting has been going on here, but I have made a little bit of progress on a couple of projects.  Unfortunately, the one is my last test knit for some socks I designed that I am STILL working on (tech editing the pattern--wish I could afford some help), so I can’t really show you much of that yet.  Below is a shot of the yarn I’m using for the final knit — after all, who doesn’t love to see any random picture of yarn? 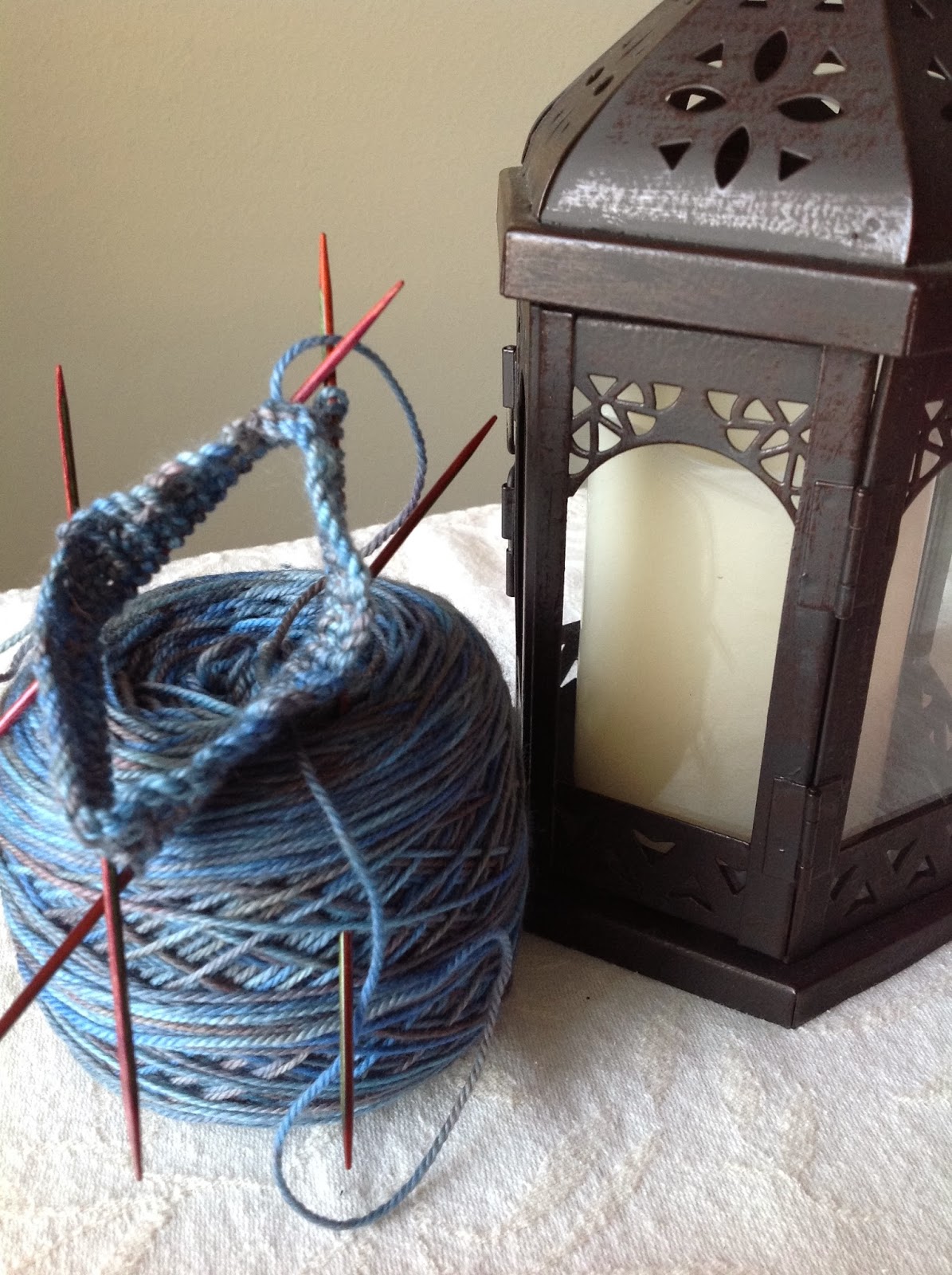 I’ve also been working on a secret project for my friend Taryn, to send to her along with the Corrie I knitted for my adopted grandbaby.  Here’s a sneak peek: 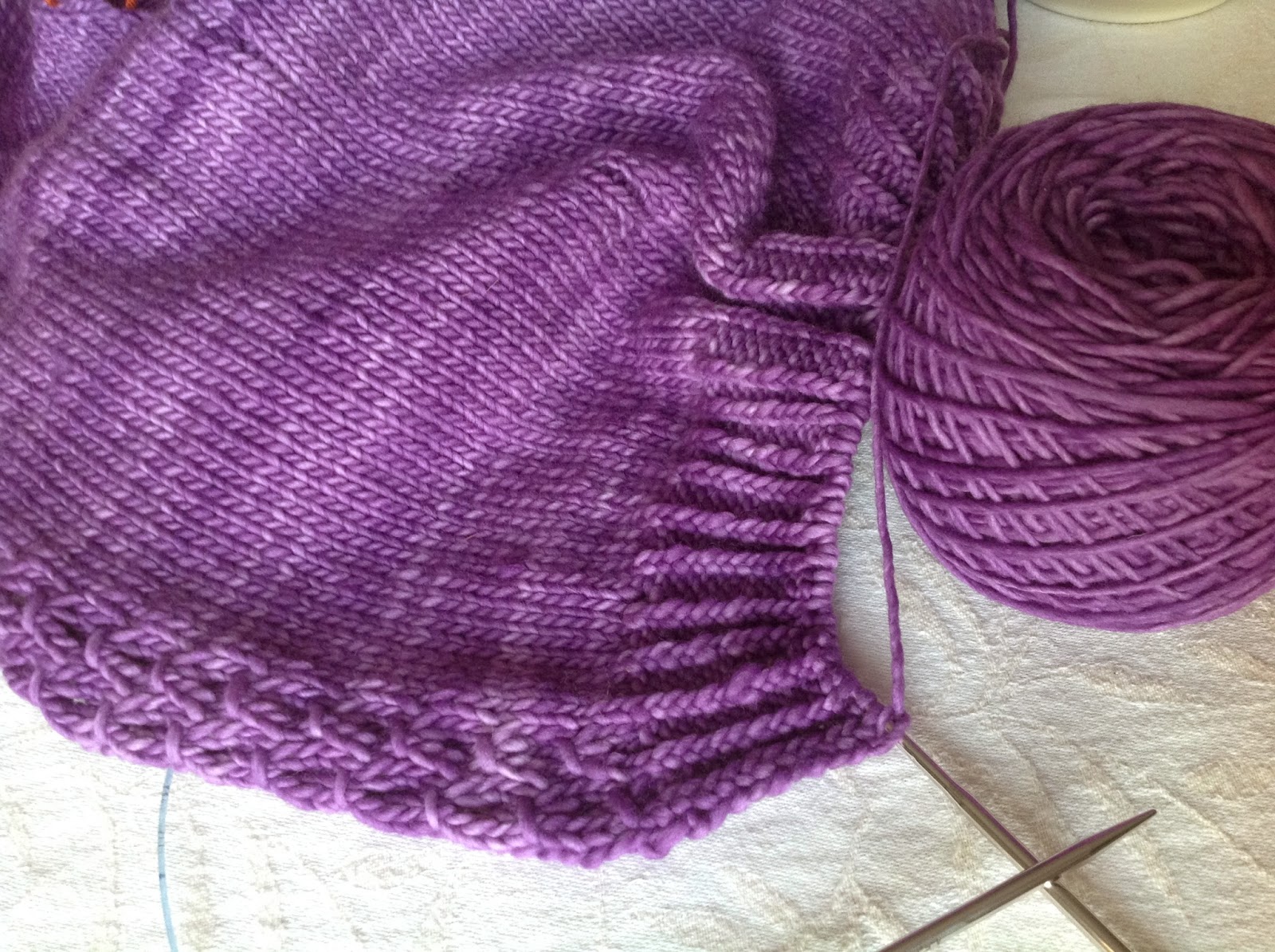 Other than that, it’s been work, work, work.  And speaking of work, one of the doctors I work for got everyone in the office an orchid for Valentine’s day (has it really been that long since I blogged???).  I’ve never had an orchid before and it is gorgeous.  So far, I’ve been able to keep it alive which is a real miracle for me.  The Husband has the green thumb.  Mine aren’t even a hint of green.

Finally, we had some friends from Canada stop by to visit our lake out back. 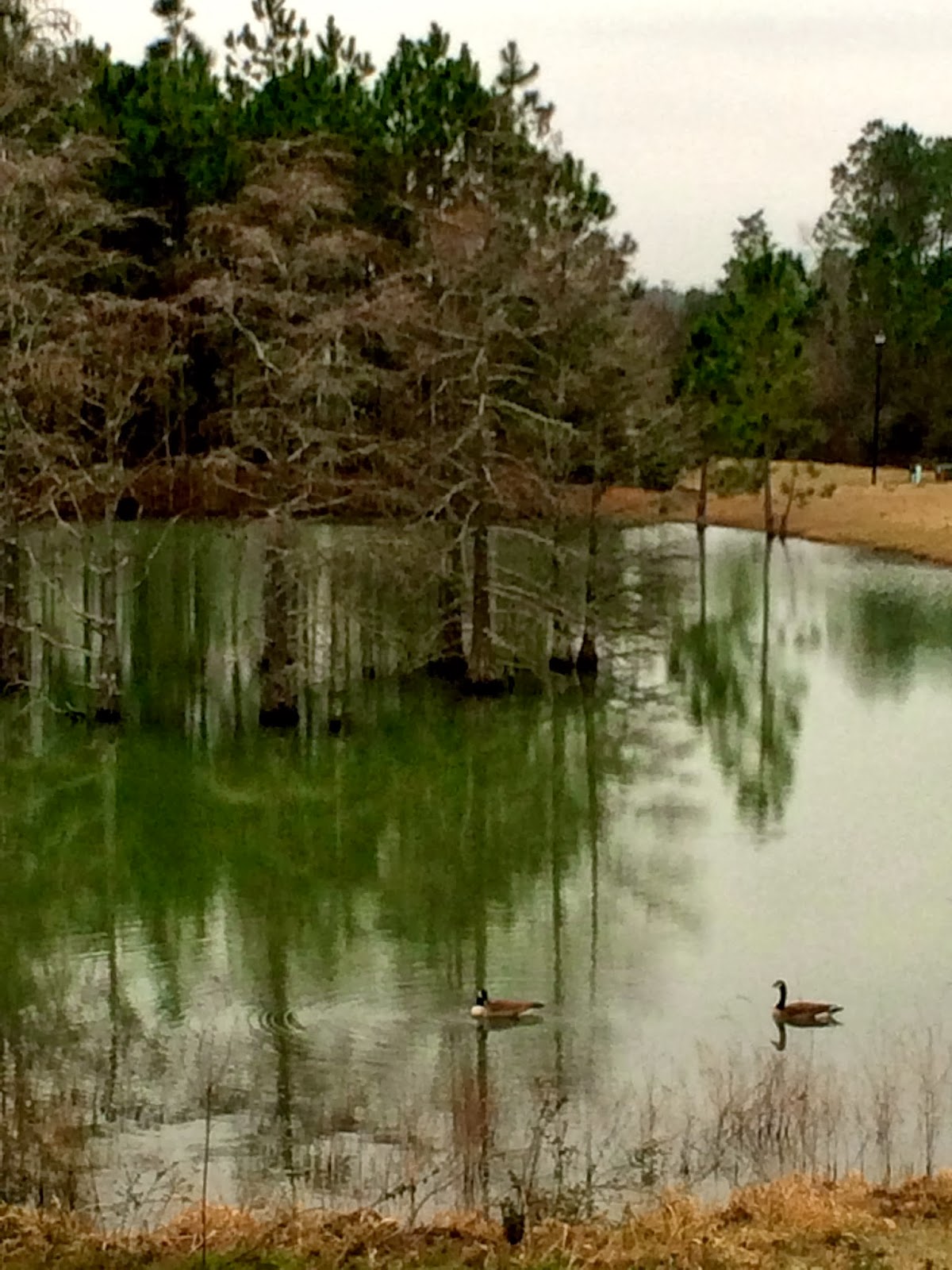 I saw plenty of Canadian geese while living in Ohio, but I've never had them sitting on a lake in MY back yard.  :o) One of my favorite things about living where we do is the wildlife we get to see close up.  The other day, The Husband and I counted five turtles swimming around in the lake (okay, maybe I excite easily).

If the sun would commence to shining (working on my Southern phraseology), today would be darn near perfect…