Last post, I let you know I was going to have another grandchild, and I do!  Her name is Addison and she’s the bee’s knees!  Between she and Miss Nora (who is growing like a weed), I’m a happy grandma.  Just wish I saw them more often, as they live up north and I’m still here on the coast.

Last month, my husband took me to the Bahamas and it was grand.  We stayed at a resort in Nassau and I loved it.  It was the first real vacation we’d had in 5 years.  Wish I was back there now, as it’s taken a turn for the cold here in the Deep South and I’m not pleased.  I took knitting with me, but didn’t work on it much as I think it makes the husband a little embarrassed when I knit in public.  He’s still under the delusion that knitting is for old people. I know…I should knit anyway.  Besides, I’m almost old…

Okay, enough of the beach.  I miss it too much.  I’m posting pics of some things I’ve finished since my last post.  There aren’t nearly enough completed projects to fill an entire year, but it’s all I’ve had time for. 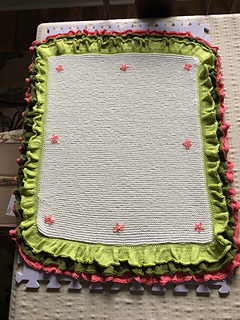 The last blanket was one I came up with using the Whale and Waves pattern I found. I lined it with a very soft, fuzzy fabric to keep baby's fingers from getting caught up in the floats.  My Ravelry project page is HERE.  The baby was born today.  :-)