Yesterday was glorious in that the sun shone brightly and I got a lot of detailed (non-knitting) stuff done.  I also made time to go out and sit in the sunshine for a bit in the back yard, even though the back yard is currently a disaster (no, I have not raked those blasted leaves yet).


Unfortunately, days like yesterday have been in short supply lately.  Today is once again gloomy.  Our normally sunny coast has been lucky to get two days of sun out of seven and those dreary days seem to kill my ability to be productive.  I’m feeling rather cheated, as one of the main reasons we moved here from Ohio is because up there you can go a full 31 days and only see a half day of sunshine.  I have Seasonal Affective Disorder and when you couple that with impending menopause, it was just safer for everyone if we found someplace sunny to live.  I’m beginning to think that lousy weather just follows us.  Our first winter here was colder than winters usually are and we got the blame.  We took our first cruise to in 2010 and it got so cold that the ship was serving more coffee and hot chocolate than cocktails (one day I’ll write a book about our disastrous vacations).  Now the sun has hidden itself away more than is normal.  A few weeks ago, we were watching a TV show about living in and The Husband said we should move there because the weather is so consistently beautiful.  I replied with, “Yeah, until we move there.  Then the weather would be crap.”  I just couldn’t do that to .

In spite of the fact that cloudy days sap my motivation and remove any desire to do even simple things like actually take a shower and change out of my pajamas, the good news is that even when it’s gloomy, I have no problem knitting.  Lately, this has resulted in my finishing the body of The Husband’s sweater.  Ta - daaaa! 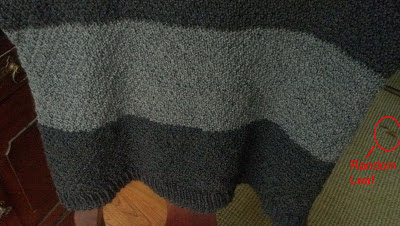 Next step:  sleeves.  Now you know that I’ve had issues with sleeves before but that was a while ago and I’d like to think my skills have advanced some since then.  DPNs no longer scare me so I powered right along and cast on the first sleeve.  The sleeves are worked from the cuff up and like most men’s sweater sleeves, they begin with ribbing.  I blew through 4 cm of ribbing then began the now infamously tedious moss stitch and made it to my first increase.  That’s when I saw it.

What the heck?  I did my gauge swatch.  I was using the proper size needle.  Okay, maybe it was just me.  Maybe it only appeared to be huge so I hauled it back to The Husband’s closet to compare it with his other store-bought sweaters.  Yep.  It was huge.  As I looked at what progress I’d made and how beautifully the moss stitch looked and thought about how much time I’d already spent on this little sleeve-ling and how much I really hate frogging things, a ridiculous thought came to me.  Maybe the cuffs on his other sweaters are too small (yes, it’s amazing what rationalizations your mind can produce when you’re trying to avoid something).  Yes, that’s it!  That must be it!  So I waited until The Husband returned home from work and had him stick his hand into the thing.  Yeah, it was huge.

So last night, I pulled it all out and decided (in a fit of further stupidity) that I’d try working it with a smaller needle.  Truth is, I didn’t want to do the math it required to adjust the stitch count.  I got several rows of the ribbing done and deluded myself into thinking it looked smaller so I had The Husband stick his hand through this one.  It looked remarkably like the first one.  Idiot…

Third time is a charm, right?  I did the math and could tell as I was working that this cuff was going to be just right.  The Husband agreed this morning.  He had no choice really, as I sort of threatened to stab him with my DPNs if he looked at version 3.0 and decided it was now too small.  There now.  All is well.  Er…not really because I still have to finish the stupid thing.

In the meantime, it must have been the wild look in my eye last night after pulling out cuff #2 that convinced The Husband to tell me that maybe I should work on something else for a while.  I didn’t take him up on that at the moment, but once I realized cuff #3 was going to work, I cast on this: 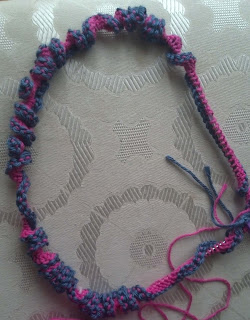 I’ll keep this a mystery for now because I want to surprise someone with it.  Oooohhhh, a mystery!  What is it?!  I’ll give you a hint.  It is NOT a cuff…