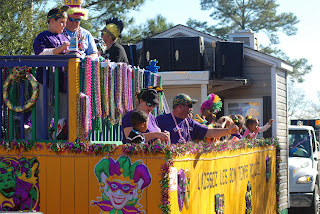 It was a beautiful sunny weekend here on the and it’s that time of year when Mardi Gras permeates everything.   Mardi Gras was a foreign thing to us Northerners when we first moved here.  I couldn’t believe the kids actually got a couple days off of school for it.  I guess when you don’t have to worry about making up snow days, an extra holiday here or there doesn’t matter that much.  Anyhoo, there are several parades over the course of the MG season and one of them goes right down the nearest cross-street from our house.  Many MG parades and events around here aren’t exactly G-rated, but this one is because it’s really a kids’ parade, so at least most of the participants are not drunk.  We usually attend this little parade together but since I came down with the crud, The Husband had to go Saturday and enjoy it by himself. 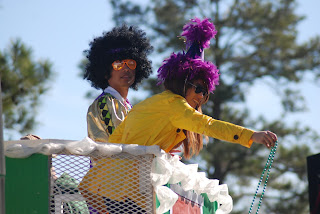 MG parades still mystify me.  They consist mainly of several decorated trailers hauling a bunch of folks who throw stuff at you.  It’s usually not even stuff that you want, like $50 bills or (dare I say it) balls of quality yarn.  It’s mostly cheap plastic beads that either end up hanging from your rearview mirror in the car, sitting in a pile somewhere in your house until you get tired of seeing them and throw them into any random drawer to get them out of sight (along with the previous year’s collection), or laying in various and sundry gutters along the parade routes*.  The exception to this is when they throw Moonpies (which The Husband scored a few of - yum!) or, I hear this year, one restaurant was throwing actual wrapped chicken sandwiches (which The Husband did NOT score any of and I was sad).  Each trailer comes equipped with NASA-sized speakers emitting music at a decibel level one notch past deafening.  There are also dance teams, men all dressed up who may select you to receive a flower from them and who expect a smooch in return, and some local “celebs” I probably should know but don’t, riding in convertibles doing their best parade wave.  I have as yet to see one single marching band in any of these parades.  Where are the stinking marching bands??  How can you possibly have any sort of parade without at least one measly marching band?  (Yes, I was a band geek years ago.)  So, all this to celebrate… 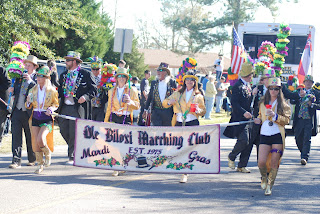 And neither do most of the folks having the party.  Okay, don’t write me a novel about what Mardi Gras is about.  I already Googled it.  Historically, it’s to do with the time leading up to the Christian season of Lent.  Fat Tuesday is generally a day to gorge yourself on all sorts of everything before giving things up for Lent.  This is taken very seriously in some countries and cultures.  But here, Lent has very little to do with it.  Here, it is not just about Fat Tuesday, as the celebration starts several weeks prior to that day.  Here, methinks it be an excuse to engage in merry-making and revelry for an extended period of time.  Hey, it wouldn’t be the first time, now would it?  :-)

So I’ve decided to embrace the idea of Mardi Gras, but with some changes.  First, my Mardi Gras will no longer be referred to by that name.  Henceforth, it shall be called Planquer Gras, meaning Fat Stash.  Trailers will be loaded down with fiber people who will throw lovely skeins of merino and the like as well as other desirable knitting stuffs.  While we’re at it, let’s get some spinners on those trailers as well.  Convertibles will showcase our local yarny heroes like Lady L. who, instead of doing a parade wave, will be a moving demonstration of cabling or some other such technique.  Trailer decorations will be of the fiber persuasion, of course.  Instead of local dance teams, we will feature teams of synchronized knitters.  I’ll have to insert at least one marching band to be true to my former band geek glory but we’ll see that each member has something wooly on.  Next year, we shall spend several weeks engaging in sweater-making and Ravelry (see what I did there?).  Yep, I’m liking this whole idea.

Oh, and just one more thing.  The Moonpies can stay.