It's Saturday evening.  The day flew by.  Does this happen to anyone else or is it just me?  I cherish my weekends, but they always manage to drive by like a NASCAR driver on amphetamines.  I did get some things done today, like finally hanging up the $10 wall hanging I got from Hobby Lobby that had been sitting in my yarn room/office since I bought it over a month ago.  Actually, it sat on my dining room table for at least half that time until we had guests over and I was forced to hide it.  I KNOW I'm not the only one who's hidden stuff in a spare room...right???

Speaking of my yarn room/office, I had a horrible experience a couple weeks ago.  It seems that all of a sudden, my eyes were opened to the disaster that this room had become.  These pictures were taken some months ago and it only got worse from there: 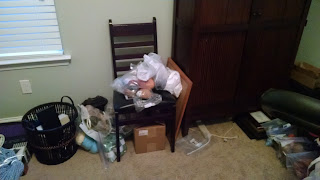 And so, having had my eyes opened to the atrocity of what should be my favorite space, I decided I had to act.  I did what any marginally creative person would do.  I went to Target and bought some cubicle-type shelves so I could organize my space.  Et, voila! 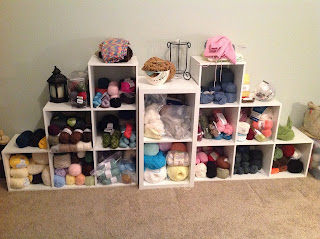 Okay, it still needs some straightening, but I think you'd agree it looks much better than the before picture, yes?  Gone are the massive loads of fiber, miscellaneous boxes, bags, and scraps from the floor.  All I need now is a comfy chair and I'm set.

Once I got my yarn stash put into their little cubbies (yes, that's actually all of it - I've been pretty good about not yarn hoarding lately), I found myself inspired.  It was kind of like Christmas, since I found stuff I had forgotten about.  Anyway, seeing all of that beautiful yarn makes me want to knit.  A lot.

Of course, when you decide you must knit, you have to make a decision about what to knit.  For that, I turned to my Ravelry queue.  It became clear immediately that I needed to do another "cleaning".  My queue was filled with over 75 potential projects.  This, in and of itself is not a problem, especially in light of the fact that I have well over 3,000 patterns in my library on Ravelry.  No, the problem comes in because, dear readers, menopause has not been kind to yours truly and I have gained enough weight around my middle (see caption about exercise bike above) that at least 1/3 of these patterns would no longer complement my slightly expanded frame.  Yes, I have learned that positive ease is now my best friend.

Thirty minutes later, my queue has been revised and I'm down to 55 patterns I've decided I simply MUST knit at some point - hopefully sooner rather than later.  And number one in my queue is a pattern I just found today.  It's Atlantique by Anne Hanson. 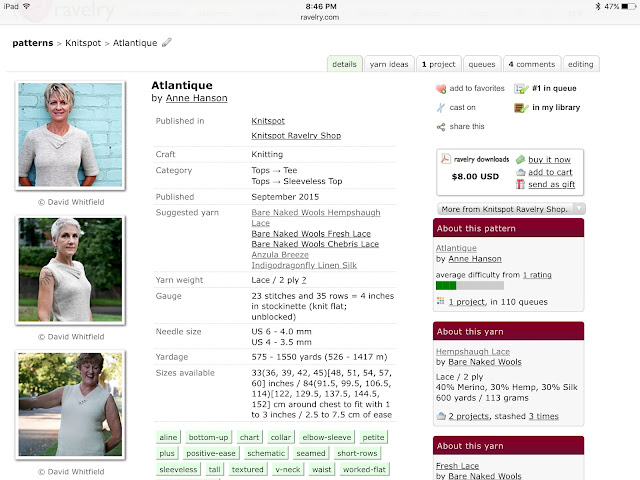 I absolutely love her designs - her style is so parallel to my own.  I absolutely have to knit this pattern!  Now I am just trying to come up with the most affordable way to make it.  The pattern calls for Bare Naked Wools's Hempshaugh Lace which is a blend of 40% merino wool, 30% hemp, and 30% silk in a lace weight yarn which is a pretty hefty $48 per skein.  As much as I love Anne's yarns (I knit a blanket for Nora from BNW's Confection), I simply cannot afford to sink that much into this project.  So I'm looking for a reasonably-priced alternative.  Your input is very much welcomed.

Anyway, we'll see how far I get in knitting down my queue.  There's a good mix of stuff for me and of course, granddaughter stuff.  Not to mention, I've got to get my Christmas knitting list together (yes, I know, it's kind of late for that), assuming I decide to knit for folks this year.  Of course, Nora will get a good share of hand knits regardless.

How many items are in your queue?