Today is an almost perfect morning.  Sunshine, coffee, and bunnies.

Yes, that’s right:  bunnies.  Not the living, breathing kind (we already qualify as a zoo) but the knitted, stuffed kind.  It turns out, once I began to actually pay attention to what I was doing, the Bunny Blanket Buddy pattern knits up very quickly and easily.  So much so, that I completed two of the little buggers in just a few hours over the course of a day or two. 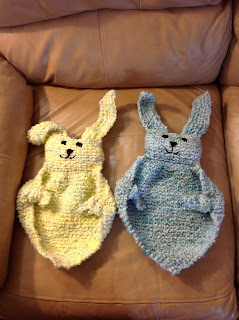 I am pleased with how they came out (in spite of my obvious lack of needlepoint skills*), although I modified the second one a little.  I completed the first bunny according to the pattern (the yellow one), but the more I looked at it, the more I felt that its wee head wasn’t quite wee enough.  So on the second go-around, I reduced the number of stitches for the head by a total of four and I think number two looks a little less top-heavy.  I had to run to Hobby Lobby to fetch a skein of the Baby Bee Angel Fleece in a boyish color (note to The Husband – I got it for a little over $3, so don’t even go there) and now I have a pair to give to the twins who will arrive sometime in June.

The only other baby stuff I’m planning for the immediate future is two sweaters for the above-mentioned twins.  The Baby Bee Sweet Delight Prints yarn was still calling me and after a few torturous runs through the baby boy sweaters on Ravelry, I settled on a Spud and Chloe pattern, the Hello Baby Cardigan.  It was a freebie, which is always a bonus.  Last night I cast on what will be the boy version: 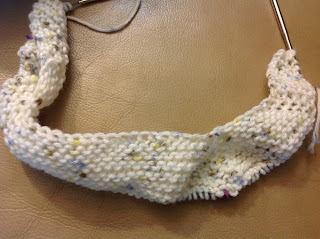 I found some adorable buttons on Etsy which I’ll order in as soon as I get my recent root canal and crown plus a required new set of tires paid for.  These two things put a serious dent in my yarn budget, but it is forcing me to be creative with my stash (if you listen closely, you will hear The Husband cheering).

My daughter had a rare weekday off last week so we got to go to lunch.  Before we left the house, I stashed the camera and a couple of FOs in the car that I didn’t have great pictures of, thinking that we’d stop down at the beach and I’d try to take a few decent shots.  I might have actually succeeded if the wind hadn’t been blowing so hard.  Below is the best picture I got, which isn’t saying much.  But my daughter is adorable, even when windblown, so it isn’t a total loss.  : )  She’s wrapped in a Fairview Scarf I knitted several months ago that I finally got around to blocking.  I used Sublime’s Baby Cashmerino Silk DK, which was really too heavy for this project as the pattern called for fingering weight yarn, but the yarn is soft and the stitch definition is beautiful.  I haven’t found a Sublime yarn yet that I don’t like.

And last, but certainly not least, you’ll never guess what I’ve been busily (and so far, successfully) working away on.  Okay, you’ve probably already guessed that it’s my Spider Silk lace shawl.  Last week, I picked it back up as you know, and I’ve been making slow, steady progress.  In fact, I only have about 20 rows to go.  I really hoped to have it done before putting up another post, but seeing as how I’m now working with well over 600 stitches AND I don’t want to completely ruin it by rushing, it will get done when it gets done.  So far, it still looks like a blob:

I can’t wait to see what the magic of blocking does to it.  Unless it comes out terrible, in which case, I shall require vast amounts of medication and quite possibly, a short stint in an appropriate facility for those who have suffered a nervous breakdown.  But let’s all think positively, shall we?

*No, Leona, I can’t let you teach me how to do needlepoint.  I would have to stop eating to afford it, and I really, really like to eat.  Although I was eyeballing a cute little elephant canvas last week at knit night…