WIP Wednesday (for once)

For many crafty bloggers, Wednesday is WIP (Work In Progress) day.  Being the rebel that I am, I have never actually posted a WIP Wednesday entry, but since I’m feeling agreeable today (read:  I actually have time to write and have some stuff in the works and it happens to be Wednesday), I’m cheerfully titling this post appropriately.  The fact that I’m able to write anything at all today is a miracle.  My allergies have been incredibly bad this year and today I feel like Popeye because there is a large, disgusting glob of goo just sitting in my left sinus cavity, making my head feel lopsided and causing my left eye to water.  Joy and rapture.

I’m moving along on both the project for Baby C (which I’ll not post a pic of just yet) and Aurelia which is pictured here: 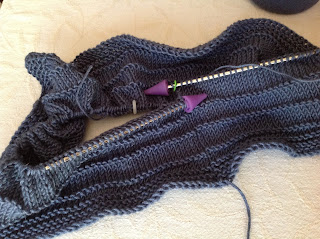 The Baby Bamboo yarn is soft and nice to work with.  The down side is that I’ve found knots in the skeins (which are only 105 yards per skein) and have had to cut them out after unsuccessfully trying to knit through to see if the knot would hang to the back of the fabric.  It didn’t.

I cast on another pair of socks – yay!  These are called Honey Badger and I’m using what’s left over from my Ashton shawlette of the Jitterbug yarn in the color Whirley Fig.  I have only a partial skein left, but I’m crossing my fingers that I’ll have enough for both socks since I didn’t use very much of it on the shawl.  I may start the heel flap earlier than called for just to be sure.

Here’s a debut picture of my never-ending WIP: 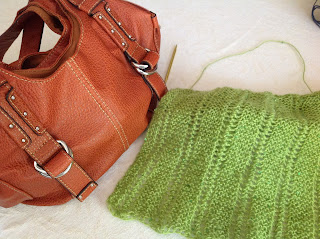 This is a scarf I started almost a year ago that I have kept in my purse in order to always have something easy to grab and knit.  The yarn is Patons Lace Sequin and the pattern is called Claire.  I don’t pull it out very often, as you can see from the lack of length.  I may actually finish it one day.  Maybe.

I managed to make it to The French Knot yesterday for a little while.  It was the first time I’d been there since I finished my lace shawl.  Lady L. put on her superhero cape and showed me how to fix the gaping hole in it which was actually a completely dropped stitch and would have eventually left me with a lovely run in the thing (Leona rocks, I tell ya).

And finally, do you remember the yarn that I picked up from Gynx Yarns in the colorway that I was absolutely crazy for?  I have still been contemplating what to make out of it and I had an idea but wanted to see exactly how it would knit up, so I did a small swatch of it: 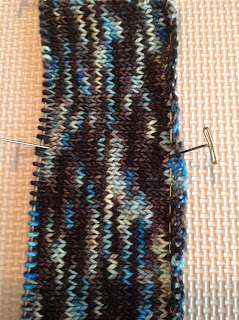 I LOVE this yarn.  I loved it before I swatched it.  Now I love it even more.  :D  The swatch confirmed what I had in the back of my mind.  I think I’ll do up a basic vest.  Maybe I’ll even try my hand at designing my own (no sleeves – HAS to be a plus for designing, right?).  Since I live in the South, vests are a nice alternative to sweaters, plus I hope it will leave me with enough to do a pair of socks.  Woot!  I do, however, reserve the right to change my mind…

***  ***  ***
P.S. – My friend Deidre from my has entered the Duck Dynasty Camo Cameo contest with an awesome needlepoint canvas she designed and stitched herself of the DD crew.  Should you be so inclined, I know she’d appreciate your vote which you can do on Facebook by clicking HERE.
Posted by Lisa at 11:31 AM