Off The Road Again

Aaaaand, I’m back.  Was a quick trip to Florida and I loved seeing my aunt and my mom, but I sure am glad to be home (and back to my laptop)!  It seems like the older I get, the more fond I am of home.  Hope that’s not a bad thing.  I could be on the verge of dementia.  If I am, don’t tell me…

Along with the homecoming always come things I need to catch up on.  I’ve been remarkably productive so far today.  Probably stems from the early bedtime last night after the 7+ hour drive.  I’ve dusted the furniture (I’m ignoring the floors today), started laundry, and The Husband and I managed to clip the dogs’ nails – a task that was sorely overdue.  My daughter has taken over this job for her own little doxie, but the other four remain for us to do.  Two of them, Daisy and Hildy, are no big deal.  No fuss, no muss, a few quick clips and they’re done.  A third, our long-haired male, Tigger, is a bit more work.  Not only does he not cherish having his nails clipped but because he’s a long-hair, his paws must be trimmed of excess fur.  He cherishes this trimming even less than the nail clipping.  The last time I trimmed his nails, I skipped clipping the fur (I don’t cherish it either), so this morning if you had looked at Tig’s feet, you really couldn’t have seen there were feet there.  It just kinda looked like he was walking around on unruly balls of fur.  We managed to get him cleaned up and clipped and then, last but not least, there’s Trixie.  While Tigger doesn’t cherish having his nails cut, Trixie is absolutely traumatized by the whole thing.  She refused to go outside where the trimming was taking place, so when it was her turn, The Husband had to go back inside to get her.  She then proceeded to pee all over herself as he carried her outdoors.  Poor thing.  It’s not like I’ve hurt her in the past while clipping; there are just certain things she doesn’t like AT ALL and this is one of them.  Less than a minute later, it was all done and she promptly ran back inside and to her “special” place.  It’s the same place she goes when I get out the dreaded monthly flea pill.  She runs under the kitchen table and sits against the wall under the stool.  It’s like she thinks she’s blending in and can’t be seen.  What a sad little dog.  I think she may eventually need therapy.

I DO have some GREAT news!  Remember I told you that my was closing and that we were hoping for a buyer?  Well, someone bought it!  Yay!  It’s staying open, under a new name but under the same management (Lady L. et al).  This came just in time because it was scheduled to close at the end of February.  I can’t wait for Tuesday and knit night!  In the meantime…

I made some progress on the very nice but extremely tedious sweater for The Husband while I was gone. 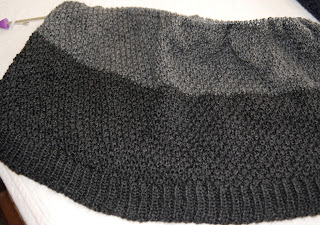 I was so excited that I’d finished my first project on DPNs (and so tired of the continual seed stitch above), that I cast on and finished another baby hat from a different pattern that actually includes two different hats that is aptly called Two Lace Baby Hats by Heather Tucker.  I made the fan lace hat: 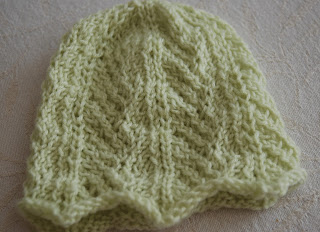 I used Euro Baby Babe yarn, colorway 8.  The yarn is nice and soft but quite thin and I can’t seem to come up with anything else to do with what I have left.  I have the rest of the light green plus an entire skein of a sweet pink.  Any ideas?  Anyone?

I mentioned to you before that I have one friend whose little girl is due any day now (official due date is Monday the 28th) and I know another dear couple expecting twins this summer who just found out they will have a little boy AND a little girl!  I will be knitting a lot of baby stuffs this year!  Yay!