“At first I was afraid, I was petrified…”

Yes, I grew up during the disco era and Gloria Gaynor and I sang I Will Survive loudly and proudly in those days.  When we were teenagers, my best girlfriend (known her since I was 4 years old) and I used to sing together at local festivals and other silly little events in our small-town area of and believe it or not, we actually performed this song.  It was the unplugged version:  two voices and a mediocre guitarist (me) trying to be hip and sing disco.  We were stylin’, baby…or so we thought.  Reflecting back now, it just seems really nerdy.  Not much has changed, at least for me.

Why the ode to Gloria?  Because I did indeed survive the dreaded root canal yesterday morning (woot) and her classic song kept floating through my post-stress mind yesterday afternoon as I waited for the right side of my face to feel normal again.  Let me just say for the record, my dentist rocks.  I made my appointment first thing in the morning so I wouldn’t have all day to talk myself out of the procedure, and I was home a little after 10 a.m. sporting a temporary crown that I must say looks better than the old permanent crown he had to replace.  I nearly did talk myself out of the whole thing on Wednesday, but the only thing I dread more than having to do something I really don’t want to do is prolonging the inevitable and having to do it down the road when I could have had it over and done with.  As long as I can remember, if there is something unpleasant to be done on my list, I’ll do the unpleasant thing first to get it out of the way.  The exception to this habit is cleaning my floors.  I will prolong that agony until someone else in the house can’t stand it any more and cleans them for me, or until I have more leaves on the inside of my house than in the backyard.  At this very moment, I’m working on quite an indoor leaf display.  Forget it, you can’t shame me or guilt me.  I hate cleaning floors that much…

On the knitting front, I managed to fit some in yesterday after I slept off most of the Novocaine.  I worked a little on another baby sleep sack that a different friend has been wanting and although I didn’t commit to doing any embellishment on the thing because of my aversion to cabling, I couldn’t stand the thought of Baby C not having something cute on her sleep sack so I did the cabled owls anyway.  I’m also going to attempt to do an open bottom on this one instead of making it tapered and closed so that diapers can be changed without removing the entire thing.

Now I’m just down to the rounds and rounds of stockinette to make it long enough which is a nice mindless distraction to turn to here and there because I also began another attempt at a lace weight project (sixth time’s a charm, right?).  I decided to use a different pattern, this time a simple one by Holly Chayes whose shawl designs I just love.  The pattern is Spider Silk and was going to try it in black but the pink lace weight yarn kept beckoning me, so I’m using that instead.  Yes, I know spiders don’t weave pink webs but they don’t weave black ones either, so there…  So far so good:

On Wednesday night I finished and blocked my Glam Shells Shawl in Shibui Sock and I absolutely love it.  It didn’t expand as much as I was expecting, but it is large enough for me and I really enjoyed the pattern. 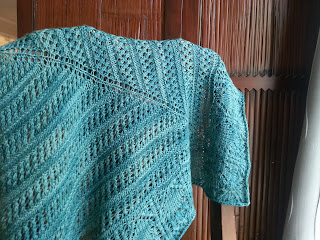 What are you working on?