"You're finished! Finished, I tell you!"

At long last, I am happy to report that The Husband’s sweater is finished!  That’s right, the one project that held within its power the ability to suck every ounce of joy out of the knitting process is done!  Here it is:

It came out fairly well, after all the trouble.  The neckline that looked confusing was actually pretty simple.  The biggest challenge, besides all of the endless moss stitching, was setting in the sleeves.  This was due to the fact that the body was knit seamlessly in the round.  The other times I’d had to set in sleeves, the body was knit in pieces and the side seams were sewn after the sleeves were set in which is a lot easier than the contortionist positions I had to use in order to get the thing to lay properly so the sleeves wouldn’t go wonky on me.  The best part about this project?  Never having to knit another one…

Once the sweater was done, my knitting joy returned and I found myself able to make great progress on some other things.  I had some Nuna yarn left over from the sweater and it is very nice yarn so I whipped up a hat for The Husband, seeing as how the first time I tried one for him it came out small enough for a child’s doll.

I used Stripes for Spring by Moa Maria and it was an easy knit.  I still have enough Nuna left to possibly knit a nice hat or cowl for me.

Aaaaannnnddd…I also managed to finish the project I’ve had you guessing about.  And the project is…(drum roll please)…a WOOBIE!

It came out much better than I expected so it will actually be gifted to the newest baby girl I know.  I got the pattern in an e-book I bought a while ago, the Woobie Pattern Collection – Series 2 by Kris Carlson.  It contains patterns for 8 different woobies which I thought were adorable.  I will likely make another at some point.

I also made another Baby Hat in Little Basketweave by Lenore English for my mother-in-law to take to a baby shower in April but I forgot to take a picture of it before I shipped it to her.

Staying in productive mode, I cast on the much-anticipated socks with my Shibui Sock yarn.  I chose a simple pattern – Basic Ribbed Socks by Kate Atherley.  After I started, I began to get concerned about being bored with the k3, p1 pattern that runs down the whole sock, and was thinking about ripping it before I got too far to try a more challenging pattern, when I noticed a bigger problem:

The yarn is slightly variegated and it turned out the shades were pooling in a wholly weird and unattractive way, as you can see.  So after much deliberation, I decided my first pair of adult socks would have to wait for a different yarn and I frogged what I had and cast on this: 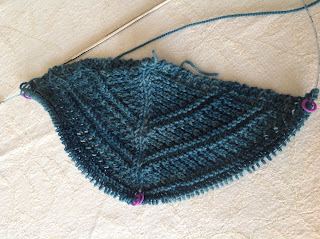 This is the Glam Shells Shawl by Marisa Hernandez and I’m just hoping I have enough of the sock yarn to finish it -  it calls for just a tad more than what I have.  The variegated color looks really nice in this and the pattern is easy but not boring.  Even if I run a little short, I think I should be able to modify it so that I come out okay.

And finally, I’ve also cast on and made progress on the lacy gift for my friend that I need done by mid-April.  I’ll not post pictures of that until after I’ve gifted it on the off chance that my friend pays this blog a visit.

So, yeah…this post seems a little boring in spite of the progress I’ve made.  I’ll close by telling you that all of us at my who are doing the mystery KAL are still at a loss as to what we’re making.  Here’s what it looks like after two more weeks of instructions:

Yep, pretty much just a bigger version of the picture I posted before.  This wasn't as fun this week because I managed to drop stitches on the end no less than three times.  It will definitely not be among my most stellar projects.  The best guess so far at what it might be came from fellow knitter Deidre who said, “Aerosmith is going on tour soon and Steven needs his microphone flair finished!”  I think she may be on the right track.  :D