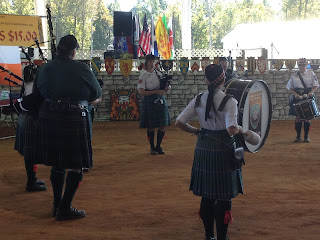 Yesterday, The Husband and I, along with my daughter, went to the annual and Islands Scottish Festival held at our county fairgrounds.  For The Husband and I, this is the third year we’ve been in attendance.  We both have Scottish ancestry so I feel like it’s a special festival thrown just for us.  It would be rude not to attend.  They have a renaissance area, jousting (yes, really), pipe and drum corps, bands performing Celtic music, Irish dancers, booths for different clans, a lot of information on genealogy, plus Scottish and Irish goods for sale.  Then, of course, they also have food.  I pretty much operate on the philosophy, “If you cook it, I will come.”  This principle has served me well over the course of my life with one exception that I discovered at the Scottish Festival:

Now, I’m an adventurous sort.  The Husband and I have tried scads of different ethnic foods from your run-of-the-mill Mexican variety to Ethiopian (my personal favorite and yes, they DO actually eat more than rice and water).  There are very few things I refuse to try.  I’ve eaten calamari (squid), and escargot (snails – they weren’t bad, really).  I do draw the line at bugs or any kind of animal genitalia (that’s just disgusting).  So even though I’d heard lots of bad press on haggis (Google it – you’ll see why when you read the ingredients), I figured, “How bad could it be?”  So last year, I tried it.  Um…yeah.

I took one bite of it and almost instantly gagged.  In fact, I think it should be called “gaggis” instead of haggis.  I spit the bite out and I did not take a second bite.  Instead, the haggis found itself a nice home in the trash can.

I have realized that this is perhaps one dish that owes its existence to stark necessity.  I mean really, the folks who invented this stuff must have been out of their minds with hunger.  I just can’t fathom anyone eating haggis unless their lives depended on it.  I can’t envision anyone sitting around thinking, “I sure wish had me some yummy haggis!”  If anyone tells you they crave haggis, they’re either lying or their taste buds and their sense of smell have become chemically eliminated. 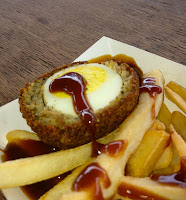 Anyway, I did not repeat the haggis mistake again this year.  I opted instead for a Scotch egg.  They are actually pretty yummy, especially with the requisite HP Sauce.  And we had a nice time browsing and eating anything BUT haggis.  When we got home it occurred to me that I didn’t see any booths featuring knits.  I may just have to explore this under-represented craft after I get through my Christmas knitting.  I’ve never done but it’s beautiful and I’m game.

Speaking of my Christmas knitting, I finished my pretty top-down sweater a couple of days ago and I’m now making good progress on the Malabrigo sweater.  I’ve already divided for sleeves.  I am so impressed with the Malabrigo yarn.  And it looks like I might actually finish my Christmas knitting on time.  Next year, however, everyone’s getting an ornament…
Posted by Lisa at 10:27 AM