The Honeymoon is Over

I finally completed the sweater I’ve been working on for Christmas, having received some invaluable assistance from Lady L this past Tuesday evening at knit night at my (pictures will be posted after Christmas).  I was telling the ladies there that I’ve moved out of the honeymoon stage of knitting.  Yes, out of the innocence and naïveté that graced each skein of yarn and every square or rectangular pattern purchase.  Away from the early thrill I felt at producing a simple scarf or wrap.  Gone are the days when I worked steadily on one project at a time, purchasing just what I needed for that specific object.

I have officially moved over into complete obsession.

As I look back, I can now recall what I believe was the beginning of the transition between the “this is a fun hobby” attitude to the “if I don’t knit, I’ll die” way of life.  It started even before I found my .  On that day, I was standing in a Michael’s store, having selected some “nothing-special” acrylic yarn for some project or other that was next on my list when I caught a glimpse of a brightly colored sign attached to a bin of yarn.  I attempted to ignore it – to just walk right past – but it was as if there was some sort of cosmic force pulling me off-course.  I looked around nervously, to see if anyone else was being summoned, but the aisle was deserted.  As I moved closer, the sign came into focus, and there I saw it – the most beautiful four-letter word in the universe:

Somewhere inside my brain a light switched on and this glorious thought took up residence:  I should buy this yarn.  It’s soft and beautiful and it’s on !  But then logic kicked in.  This won’t work with the project you’re going to start.  It’s too bulky and the wrong color.  There’s no reason to buy this yarn now.  The light dimmed a little as I stared at the yarn, but then this:  Well, just look a little more closely.  It can’t hurt to look, right?  So I picked up a skein and examined the yardage and the weight.  Logic spoke again:  See?  It’s just not right for anything on your list.  Just turn and walk away.  So I did.  But rather than heading toward the front of the store with the yarn I’d already selected and checking out, I found myself wandering down the next yarn aisle.  It was sad somehow, turning my back on this lovely sale yarn, but how could I argue with logic?

Before I knew what was happening, I was standing in front of the sale bin once again, staring.  Then I walked away for another trip down the next yarn aisle.  Then I was back at the bin, searching my mind and begging the light in my brain for a reason – any logical reason – to buy this yarn.  A few more trips around the yarn department later and it finally hit me:  You could buy this now and find a project for it later!  Whaaat??  Could I do that? The light burned brighter.  I COULD do that!!  It made perfect sense!

I bought the yarn. 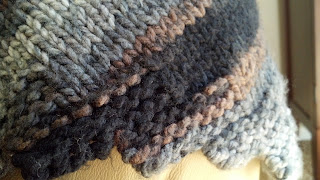 Thus was the beginning of the end of the honeymoon.  I crossed a line that day – buying yarn for some future mystery project - and  I have crossed that line many times since.  That was the day I started building my stash.  That was the day that I exchanged a little of my knitting innocence for a truth all serious knitters embrace:  you should never walk away from a good deal on yarn, even if you don’t know what you’re going to do with it.  Eventually, you’ll come up with the right project for it and you’ll be glad you got it when you did.  I ended up using the yarn from that day for a shawl that lays on my sofa in the living room.  That shawl has been used over and over and over again, making it totally worth the buy.

The journey from honeymoon to obsession – I’ve enjoyed every minute of it.

Where are you in your knitting journey?
Posted by Lisa at 11:46 AM